The Sailors' Society's bicentenary book is a treasure-trove of maritime tales, writes Melanie Warman, and many of the stories resonate strongly with the charity’s work today

Two hundred years ago, a 40-strong group of men met in the City of London Tavern determined to 'alleviate the worldly woes' of London's suffering seafarers.

Led by sailor-turned-preacher George Charles Smith, their mission was to help the large numbers of destitute sailors who had lost their jobs at the end of the Napoleonic wars and were roaming the streets of east London.

Their response – to set up a floating chapel for seafarers in 1818 – was the first act of the maritime charity Sailors’ Society, which now reaches 1,000 seafarers every day in 90 ports around the world.

The charity has marked its bicentenary by publishing a commemorative book, 200 Stories from the Sea, filled with gripping tales from its archives, from world-famous maritime events to long-forgotten accounts of tragedy and heroism.

From its early days, a key part of Sailors' Society's mission was to highlight the needs of seafarers by telling their stories through its magazine. 200 Stories builds on these articles to paint vivid pictures of violent shipowners and devastating accidents, of seafarers’ vulnerability to the markets and the elements.

The book recounts a miracle during the horrific storms of 1835, which led to the widespread loss of life and property in the north of England.

Rev Tapscott, who worked for Sailors' Society in South Shields, told the story of a vessel torn from its anchors in Burlington Bay and driven out to sea to what all who saw it assumed would be its certain doom.

'It made her way before the wind, immediately between two vessels … whose men had been in the extremity of distress, pumping incessantly for two nights and a day, seeing nothing before them, until this occurrence, but certain and inevitable destruction.'

As the ship passed between the two vessels, the crews had just enough time and strength to jump ship and board it, leading to their rescue. As they did so, their crafts 'foundered at their anchors and sank, like lead, into the mighty deep.'

One of the Society’s chaplains in the early 19th century was the celebrated missionary John Williams, famed as 'the Apostle of the South Seas' for his work on the Pacific Islands.

Williams was passionate about the 'moral and religious improvement' of sailors who would land on these islands and commit terrible crimes.

'I hope the blessing of God will rest on this Society; so that our seamen may become a blessing, instead of a curse,' he said.

In a darkly ironic tragedy, Williams was clubbed to death and eaten by cannibals on the island of Erromango. They saw him as a threat, because just a few days earlier European traders had come to the island and murdered some of their people.

The missionaries who followed Williams had greater success. Erromango became a predominantly Christian island, and some of its inhabitants felt it had been cursed by the killing of a missionary.

In 2009, 170 years after John Williams’s death, islanders invited his descendants from around the world to ask for their forgiveness, renaming the bay where he was killed Williams Bay.

From heroes to horsemeat

Over the years, Sailors' Society crossed paths with people and events that changed history, and led to some of the quirkier stories told in the book.

Among the items gifted to the Society to raise money were a section of the hull of Lord Nelson’s ship, the HMS Victory, and a key to the binocular locker on the Titanic which was mistakenly taken off the ship before it sailed – an error that a lookout later reported might have prevented the crew from spotting the deadly iceberg earlier.

The Society was also gifted an embroidered cloth in the 1920s signed by some of the most internationally renowned people of the time, including Anna Pavlova, Sir Arthur Conan Doyle, Winston Churchill and Claude Monet.

The cloth was auctioned off to raise money for the charity. Some 94 years later, the Society received a phone call from a woman who had inherited it and had been keeping it in a shopping bag under her bed. She had only realised how important it was when she took it out to help her daughter do some family tree research for school.

Captain Scott took books donated by the Society on his ill-fated voyage to the South Pole. And in 1960 some floppy-haired lads from Liverpool named John Lennon and George Harrison, who both had sailor fathers, visited the Hamburg branch of the Society to eat when they travelled to the city to play in their fledgling band, The Beatles.

Harrison returned to the Society on Christmas Day 1962 with John Frankland, the guitarist of another band he played with.

Frankland later remembered: 'We ate steaks and we found out later they were horse steaks. We’d eaten a horse for Christmas!'

Captain Scott took books donated by the Society on his ill-fated voyage to the South Pole. And in 1960 some floppy-haired lads from Liverpool named John Lennon and George Harrison, who both had sailor fathers, visited the Hamburg branch of the Society to eat

200 Stories tells many proud tales of bravery and kindness in the face of war and disaster. During the First World War, Robert Melville, who worked for the Hamburg Sailors' Mission, made the ultimate sacrifice to look after sick seafarers in an internment camp.

Reports at the time described the 'numberless errands of mercy' he carried out in the hospital before contracting the flu that killed him – including writing letters for seafarers to keep them in touch with their families.

Sailors' Society has supported seafarers and their families through countless tragedies, many of which are still within living memory and recounted in the book.

The Herald of Free Enterprise disaster in 1987, in which 193 lives were lost when the ferry capsized moments after leaving Zeebrugge port for Dover, was the UK's deadliest peacetime maritime tragedy since the sinking of the Titanic.

Society chaplains rushed to the affected ports to care for the survivors and sit with families as the tragedy unfolded. 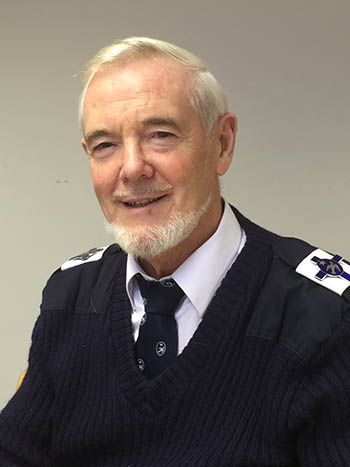 Rev Bill McCrea (pictured), who is still an honorary chaplain for the Society, was closely involved with the mariners and bereaved families in the aftermath of the disaster, and took the funerals of four crew members.

'I tremble every time I think of some of those situations,' he recalls in the book.

'It was a terrible time for Dover and I don’t think the city has ever fully recovered.'

200 Stories is a fascinating journey through a period of unparalleled change, from a time when Britain’s Merchant Navy ruled the waves to the rise of huge seafaring communities in East Asia; from floating churches to the chaplaincy apps now used by Sailors’ Society for providing global support to seafarers.

But it's also striking to see in its stories how many of the challenges that faced the seamen of George Charles Smith's time still exist today: loneliness, piracy, the dangerous unpredictability of the sea.

Despite these risks, the pull of the sea is just as strong now as it was 200 years ago – and for as long as seafarers respond, they will become a part of its next chapter.

Ships of the past: The Dreadnought

Ships of the past: Sultana

Ships of the past: Delius